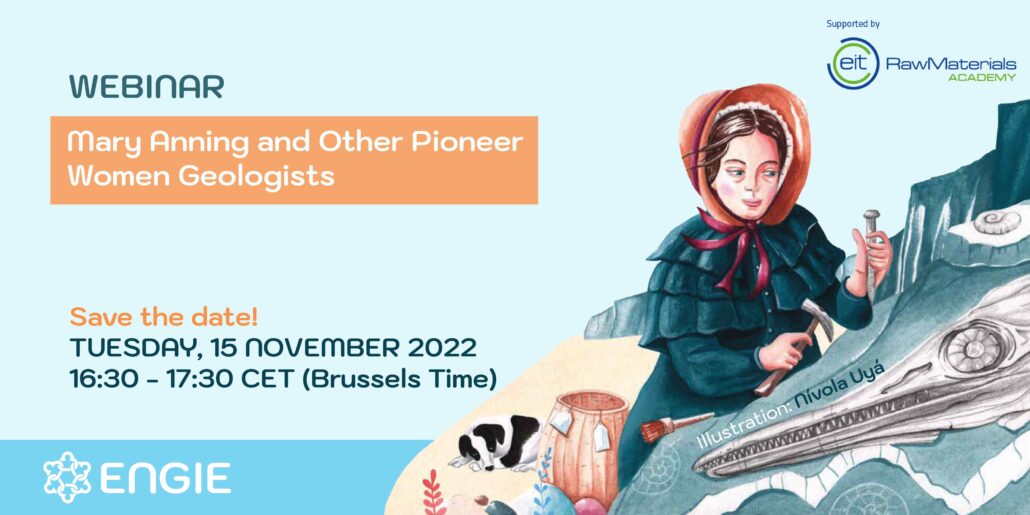 There are stories that we do not find in any official history and that can only be liberated by listening closely and paying attention to the whispers of women.

Some pioneer women paved the way in geology. However, they faced challenges for their voices to be heard and for their remarkable work to be recognised at their time.

We are inviting the authors of two fascinating books that pay tribute to these pioneer geologists: GEAS – Women Who Study the Earth and The Fossil Woman. A Life of Mary Anning. ENGIE coordinator Eva Hartai will be the host of the session.

GEAS is an illustrated booklet featuring 12 pioneer women geoscientists. The publication is a travel through time giving voice to women geologists of different times, historical contexts and nationalities. They all have something in common: they made an indelible mark on the strata of our knowledge. Spanish geologists Rosa María Mateos and Ana Ruíz Constan are the authors of this book and these 12 women were really an inspiration to them. The artist Nívola Uyá is the author of the beautiful illustrations of GEAS.

The remarkable palaeontologist Mary Anning is one of the women showcased in the book and she leads us to Tom Sharpe‘s biography The Fossil Woman. A Life of Mary Anning. Mary Anning was born in Lyme Regis in England in 1799 and was taught to look for fossils by her father who sold them to tourists. After he died, the family continued to sell fossils and discovered what were thought to be fossil crocodiles. By 1820, Mary was running the business and her discovery of a new fossil reptile, Plesiosaurus, in 1823 made her famous. Mary’s fossils and her expertise attracted scientists from across Britain, Europe and even from North America to Lyme Regis to buy specimens from her for their collections and museums. She was more than just a collector and seller of fossils; she observed where and how they occurred and experimented with living animals to help her identify her finds. She was a professional palaeontologist. However, at that time women were not admitted to most scientific societies, so despite her fame and expertise, and the respect in which she was held by her scientist friends, Mary was unable to take part in the meetings where her discoveries were discussed. Today, though, she is better known than most of the men and more has been written about her than about almost any other geologist.

Tom Sharpe was formerly Curator of Palaeontology and Archives at the National Museum of Wales and taught geology in the lifelong learning departments of both Cardiff and Bristol universities. He is a Fellow of the Geological Society, the Royal Geographical Society and the Museums Association, and is a former Chair of the Geological Curators’ Group and History of Geology Group. He has long had an interest in the history of geology, and has published on the work of the geologists Henry De la Beche and William Smith and on the history of the geological exploration of Antarctica. He is the author of The Fossil Woman. A Life of Mary Anning, published by The Dovecote Press in November 2020.

She is a geologist and writer. As a geologist, she deals with landslides and other disrupters of the Earth’s surface. As a writer, she is an inveterate storyteller, currently focused on short novels. The blog www.laletradelaciencia.es showcases her literary side. In the field of scientific dissemination, Rosa Mateos gives her all.

Register now!
The organiser of this event (ENGIE project) is collecting the data you have provided for the registration to the webinar ‘Mary Anning and other inspiring female geoscientists’ on 15 November 2022.

Your personal data are processed in accordance with the General Data Protection Regulation (EU) 2016/679.

The following personal data are collected: email address, first name, and last name. In the registration form, we also ask attendees about the gender they identify themselves with.

The recipients of your data will be the staff of the European Federation of Geologists (EFG) in charge of the event organisation. Your data will not be shared with third parties and will not be used for other purposes than providing access to the event and informing interested persons about follow-up activities.