Aswatha Biju: the awardee of the 2022 Rashtriya Bal Puraskar 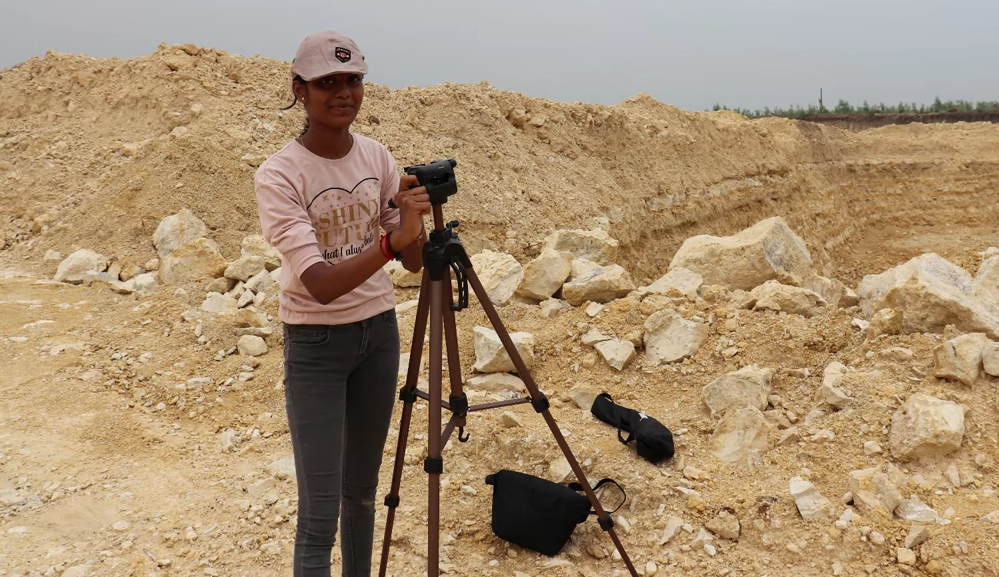 Aswatha Biju is one of the world’s youngest palaeontologists. She has won the second prize of the ENGIE project’s video contest organised in 2020 and has recently obtained the Rashtriya Bal Puraskar award 2022 from the Government of India for her extraordinary contribution to palaeontology.

Let’s remind that the ENGIE project endeavours to awaken the interest of girls to study geosciences and geo-engineering, improve gender balance in these disciplines and implement awareness-raising activities.

Aswatha’s accomplishments have also been complemented by Narendra Modi, the Indian Prime Minister, in one of his recent tweets: ‘The budding palaeontologist Aswatha Biju has a deep interest in studying fossil specimens. Not only does she collect specimens from field visits, but has also made efforts to generate awareness about this field. Glad that she has been conferred the Rashtriya Bal Puraskar.’

Through her various achievements, Aswatha surely sets a good example for other young girls who wish to step into the field of geosciences.

We have also had the opportunity to interview with Aswatha. Here’s what India’s youngest palaeontologist has to say about her exciting journey :

Can you tell us a little about yourself?
This is Aswatha Biju, I am a young palaeontologist of India doing grade 10 at Sri Chaitanya techno school. I have collected 136 fossil specimens from Ariyalur, Maharashtra and Gunduperumbedu. That comes from the Cretaceous, Jurassic, Triassic and Tertiary periods of the Mesozoic and Cenozoic era. I have been educating students and others regarding the field of palaeontology and on fossils globally, so far I have educated more than 10,000 students and others.

What exactly does a palaeontologist do?
Palaeontologists study the evolution and history of life on Earth using the fossil record. Fossils are remnants of ancient life, they can be body parts, imprints or trace fossils. Through the field of palaeontology we tend to understand the past environmental conditions of Earth. With the examination of ancient organisms we can relate the problems and hurdles our planet and organisms are facing presently and get to know what could such a change result in.  All of these together are controlled by the work of a palaeontologist.

What inspired you to become a palaeontologist?
‘An Encyclopaedia’ through which I got inspired plays a vital role in this question. At the age of 5, my father bought me an encyclopaedia in which I saw a big image of an ammonite fossil. When I was flipping through the pages it was so big that it caught my eyes hence I wanted it for sure. That small interest at age 5 took me to such a vast world of palaeontology. So, that’s what drew me into the world of fossils. Presently, I have 136 fossil specimens of invertebrates, vertebrates, microfossils, chordates and flora from Ariyalur, Gunduperumbedu and Sironcha.

Where do you see yourself in 5 years?
My ambition is to become a renowned palaeontologist and work under molecular palaeontology division in research-oriented aspect.

Please share your secrets with us; how did you become so successful in the field of palaeontology at such a young age?
Foremostly, I haven’t taken palaeontology as a hobby, I took it up as a passion. I have always been a student irrespective of what I do. This modulated me to be a strong and educative and sharp-minded person typically. In the case of palaeontology, I have always worked as a student. Reading articles, marking key points, sketching specimens, writing research papers, identifying specimens, etc… but, such a start developed my social understanding too and modified me into a social and people concerned person.

What advice would you give other young girls who are interested in following the same path?
Irrespective of the area of the subject you would like to pursue, passion for it plays a vital role. If you have 100% passion and a true form of interest towards the field, things work out extremely excellent. Therefore, I would say all to have passion on your liked subject or course rather than choosing it as a hobby.