Webinar: The Whispers of Mary Anning and Other Pioneer Women Geologists 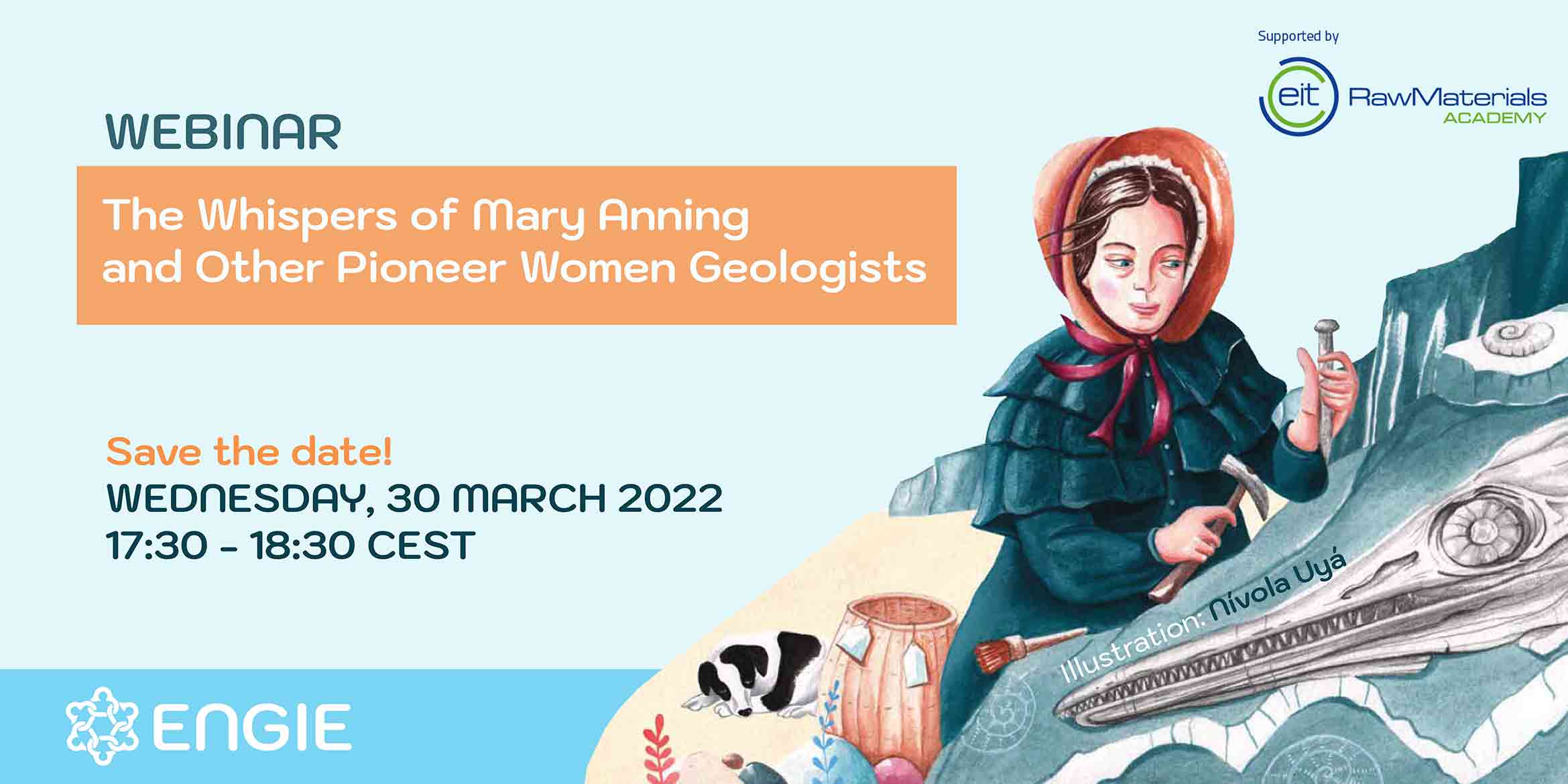 here are stories that we do not find in any official history and that can only be liberated by listening closely and paying attention to the whispers of women.

‘The Whispers of Mary Anning and Other Pioneer Women Geologists’ was a special webinar that took place on 30 March 2022, 17:30-18:30 CEST (Brussels time). The recording of the webinar is now available on the ENGIE YouTube channel.

Some pioneer women paved the way in geology. However, they faced challenges for their voices to be heard and their remarkable work to be recognised at their time and even today some of them are forgotten.

We invited two great initiatives that pay tribute to these pioneer geologists: GEAS – Women Who Study the Earth and Mary Anning Rocks. ENGIE project partner Iva Kolenković Močilac, was the host of the session.

GEAS is an illustrated book featuring 12 pioneer women geoscientists. The publication is a travel through time to give voice to women geologists of different times, historical contexts and nationalities. They all have something in common: they made an indelible mark on the strata of our knowledge. Spanish geologists Rosa María Mateos and Ana Ruíz Constan are the authors of this book and these 12 women were really an inspiration to them. The artist Nívola Uyá is the author of the beautiful illustrations of GEAS. If you would like to know more about this publication, we invite you to check the social media campaign we recently published on our channels for International Women’s Day. In addition, the English and Spanish versions of GEAS have been released open access during! The remarkable palaeontologist Mary Anning is one of the women showcased in the book and she leads us to the great initiative Mary Anning Rocks.

The structure of the webinar was the following:

Anya Pearson is a graduate from Northumbria University with a BA Hons degree in Fashion Design & Marketing and has worked in the fashion industry for over thirty years. She is Co-Founder, Trustee, and Spokesperson for the charity Mary Anning Rocks. A feminist and activist spearheading a spin off campaign called VISIBLEWomen, a group of 15 organisations raising statues across the UK to the forgotten Sheroes of our past.  Anya is also a part-time lecturer at several leading universities, specialising in ethical and sustainable solutions within the clothing and textile industries. Recipient of the prestigious RSPCA award for her work on Animal Welfare Policies for the fashion industry.

She is a geologist. Our planet soon lured her, as a curious person and nature lover, through the charm of earthquakes and volcanoes. Currently, Ana radiographs the interior of the Earth and analyses its external scars to get a little closer to its history and most intimate secrets. She is in search of any initiative that helps to show geology for what it is: an exciting science that is useful for society.

The organiser of this event (ENGIE project) is collecting the data you have provided for the registration to the webinar ‘The Whispers of Mary Anning and Other Women Geologists’ on 30 March 2022.

Your personal data are processed in accordance with the General Data Protection Regulation (EU) 2016/679.

The following personal data are collected: email address, first name, and last name. In the registration form, we also ask attendees about the gender they identify themselves as.

The recipients of your data will be the staff of the European Federation of Geologists (EFG) in charge of the event organisation. Your data will not be shared with third parties and will not be used for other purposes than providing access to the event and informing interested persons about follow-up activities.